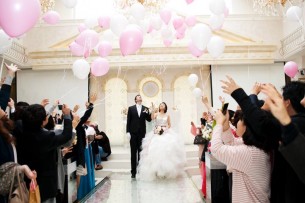 I just got back to the US last night. Actually, I arrived in San Francisco yesterday at 11am and had to wait there until 5pm before I could fly home to Washington state. I slept about 14 hours last night and feel very rested 🙂

Yunjoo and I were married on September 4th, but we still had the big ceremony at the wedding hall that she liked. It went very well, though getting everything ready beforehand was fairly stressful.

The day of the wedding, Yunjoo and I left the house early with our wedding things, wedding clothes, change of clothes, and honeymoon luggage. It was a very tight fit in her car, and we needed room for the helper lady who would assist Yunjoo with getting ready before and during the wedding.  We went to the hair salon place and got our hair done, makeup applied, and changed into our wedding clothes. We then got back out in the car, and Yunjoo had to sit in the back seat because her beautiful bell-style dress was too puffy to sit up front. Thankfully the wedding hall was close by so we didn’t have to drive far.

At the wedding hall, Yunjoo sat in the bridal room where people would come and greet her and have their picture with her. My mom and mother in-law were getting their hair and makeup done too, while I helped bring up stuff from the car. Yunjoo’s friends set up pictures and decorations on a table, and set up two very large pictures of us from our pre-wedding photo-shoot. After the mom’s got ready and changed into their hanbok (traditional Korean clothing), I joined them to greet visitors in the main entrance area. Unfortunately, I forgot many people’s names, so I had to just say “Yunjoo’s friend” or “Yunjoo’s relative” 🙁 I wish I could remember names better…

Finally, the time came to start the ceremony. The mom’s entered first, lit candles, and bowed to each other and then the audience. Then I entered, and waited for Yunjoo. The flower girls entered, and then Yunjoo did. She looked very beautiful and I seem to get easily emotional, so I had to hold back the tears. We said our vows, put on the rings, and then our mom’s gave us some nice messages. My mom got really emotional and cried, which got the audience and me all in tears too. Yunjoo’s mom spoke and was emotional too, but spoke so fast it got everyone smiling. Both of their messages were very nice and beautiful 🙂 We then cut the wedding cake and fed each other. In Korea, it’s normal for the bride and groom to just cut the cake and leave it without feeding each other. I thought this was weird, and so Yunjoo said let’s feed each other like they do in the US (but without the crazy smear across the face feeding that some do). After that, two of Yunjoo’s friends sang a song for us which was also very beautiful. Then we were all given a balloon, the ceiling opened, and everyone cheered for us and we let our balloons float out into the sky. It was supposed to rain that day, but thankfully it didn’t rain until after the ceremony 🙂

We then took pictures with family and friends, and then Yunjoo and I changed into traditional outfits and took pictures with our moms. The rest of the people went to eat at the big buffet. We greeted everyone and thanked them for coming, and had about 10-15 minutes to eat before we had to go. We only had the wedding hall for 2 hours, so we were rushing around to get everything finished in time.

Yunjoo’s brother let me drive his Lamborghini Gallardo to the airport. I practiced with him once before driving it, and had a little trouble getting used to the accelerator. I’ve never driven a real sports car like that, and didn’t realize the engine revs so high and loud… I also forgot where the reverse button was, so when we made a u-turn after leaving the wedding hall, Yunjoo and I got stuck while I scrambled to find the button. We got many cars honking at us, and my brother in-law waited for us (with my mom and aunt) in Yunjoo’s car up ahead. I finally found the button, and the rest of the drive was fine. Oh, I did forget it rained some, and how the decorative ribbons were on the car, Yunjoo would have to roll down the window, hold down one of the ribbons with her hand and then I could activate the windshield wipers. It was fun to drive.

Yunjoo uploaded some pictures on our wedding blog. We should be getting a video of the event later which will make the above description make more sense. I’ll get that added to another post later.